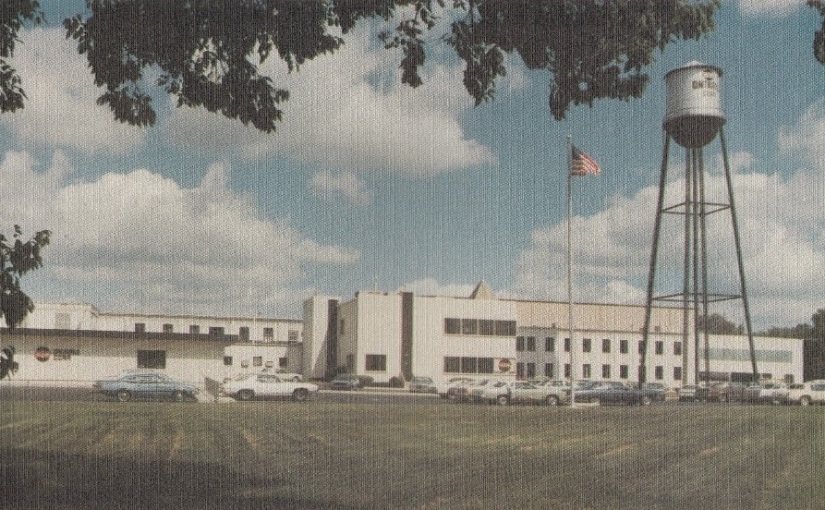 “…Ontario encourages its personnel to be active in community affairs, and seeks itself to be a good corporate citizen by attention to the appearance of plant ground.”

The Ontario Corporation was a steel forge factory located on West Jackson Street[1] for several decades. For some, like resident Nancy Elliot’s husband Fred, who worked there for 40 years until the factory closed, it was a place of employment for residents within the neighborhood. Living close to the Emerson School and Ontario while Nancy taught at Delta Middle School allowed the family to eat lunch together at home every day.[2] Emerson School did not have a cafeteria or serve lunch, so children returned home to eat. The factory also employed individuals outside the neighborhood who could not afford to live within RNC.[3] Over the years, Ontario not only changed names and ownership several times, but shifted from making “very good silverware”[4] to producing military equipment[5] and blades for jet engines.[6] However, the factory maintained a presence in community life and many residents of the Riverside Normal City neighborhood have memories revolving around Ontario. Nancy shared that the maintenance man from Ontario would set up lights at the Emerson School community ice cream social.[7] Long-term resident Sue Gaylor recounted working at Ontario where she met her future husband.[8] Despite the factory’s noise, 30-year resident Ted Brewer shared that the factory was “nice to live near, they kept it painted and clean.”[9] Darrel Brower also commented on the Lost Muncie Facebook page that in 1976 during a company picnic, Ontario gave out titanium belt buckles to its employees.[10]

Originally known as the Ontario Silver Company, the factory in Muncie was established in the early 1920s during the height of the city’s industrial expansion fueled by the natural gas discovered in Northern Indiana.[11] This factory produced mostly silverware and a few forks and knives made of sterling and steel.[12] The factory was built on the Calvert family’s heirs’ land west of the White River and North of Jackson Street, totaling 6.4 acres.[13] This location positioned the factory in the Normal City neighborhood, which was a part of the city of Muncie but within a separate civil unit of government.[14] In 1928, the Ontario Silver Company became Ontario Manufacturing Company as part of a reorganization to change the companies’ stocks from common to preferred.[15] The residents of the Riverside Normal City (RNC) neighborhood, in which the factory is located, have a connection to the factory that spans generations. Gayle Harold, a third generation resident, shared that her grandmother worked at Ontario in 1910 at the age of fourteen.[16]

On December 18, 1934, Ontario deeded the city 1.71 acres of land to levee the White River to prevent flooding and begin construction of the White River Boulevard. By 1941, Ontario had given up another 3.15 acres for the development of roadways and the parkway under the agreement that the city would gift them land north of their current location allowing them to expand.[17] Ontario received defense work during WWII producing silverware for officer messes, parts for rifles and carbine magazines, and shell casings.[18] Glen Sulanke grew up in the RNC neighborhood from when he was an infant until 1970. He remembered when the factory was built in Muncie and originally made silverware but changed to manufacturing jet engine parts starting during WWII.[19] In his interview, he also shared his memory of hearing the big stamping machines during the summer coming from the factory when the windows were open.[20]

In 1944, control over the Ontario Manufacturing Company was passed to the National Silver Company.[21] Under their control the Muncie factory manufactured stainless steel compressor blades for jet engines.[22] Resident Paul Troxell commented about the noise produced from the production of the blades on a post from the Lost Muncie Facebook page that stated residents “were all rocked to sleep with the pounding of that huge forge stamping machine” that “took so much pressure to stamp those jet engine blades.”[23] In 1955 the Ontario Silver Company changed hands again to the Rich Manufacturing Company Inc.[24] who changed the corporation name to Ontario Corporation, which it was still known by in 1981.[25] According to a May 26, 1974, Muncie Star Press article, the Ontario Corporation factory in Muncie employed 300 workers at the time on its 11-acre site.[26] The corporation became AeroForge Corporation on January 12, 1989, and manufactured precision-forged blades and vanes for aircraft turbine engines.[27] By 1990, AeroForge only employed 150 employees and 43 of those employees were female.[28]

The decline in the number of employees from 1974 to 1990 demonstrates Setha Low’s discussion in her article “The Anthropology of Cities” regarding the loss of jobs due to deindustrialization.[29] Deindustrialization affects the working-class by displacing them and disrupting their once affluent and secure lifestyle.[30] The Ontario Corporation’s reduction in the number of jobs reflects the overarching trend of deindustrialization in which fewer factory jobs are available today. Ronald Smith, a 30-year resident of RNC, mentioned that Ontario was one of the city’s major factories and that he believes the number of factory jobs in Muncie as a whole has dropped from over 16,000 a few decades ago to around 6,000 today.[31]

Therefore, understanding the impact of deindustrialization and the loss of factories, such as the Ontario Corporation within the RNC neighborhood, is important because “social change occurs though socioeconomic transition.”[32] The decrease in available jobs at the Ontario Corporation factory and factories in greater Muncie, coupled with the closing of the Emerson Elementary School in 1981[33] and the Apartment Owner Association  winning a lawsuit against the City of Muncie to change zoning to create more multiple-family dwellings,[34] all played a role in the change within the RNC neighborhood. Now the RNC neighborhood is in a redevelopment phase but the lack of jobs, no elementary school, and increased presence of renters are causing problems that Low outlines occurs during redevelopment. These include emerging conflicts among government institutions, planning experts, and local residents that stem from and contribute to struggles for land tenure rights, adequate housing, and critiques of planning and architecture as instruments of the social change. These conflicts and struggles emerged in the interviews of RNC residents. Several residents mentioned dissatisfaction with the development of the Village Promenade stating that it “ruined The Village”[35] and looks like a “contemporary warehouse.”[36] Many older, former, and current residents discussed their mixed feelings regarding the increased number of student renters as a result of the Apartment Association winning the lawsuit. Jim Lee expressed his frustration that “anyone is able to buy a house and put as many students as they want inside.”[37]

Ultimately, the Ontario Corporation was a place of employment and a significant institution in the RNC community for several decades. The closure of the factory during the deindustrialization period, coupled with closure of Emerson, rezoning of residential platts, the evolving Village, and growth of Ball State University , has deeply altered the daily lives and overall feel of the RNC neighborhood. This change has been felt by both current and former residents. Some resident are hopeful for the future of RNC in becoming a bridge between downtown Muncie and Ball State University. While others view the ever increasing amount of students in the neighborhood as detrimental to maintaining a community atmosphere, only time will tell how the RNC neighborhood will continue to develop and change in Muncie’s postindustrial development.