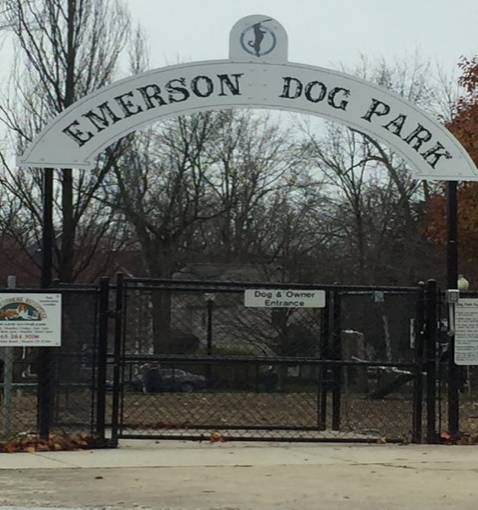 Emerson Dog Park is situated at the heart of the Riverside-Normal City neighborhood. It opened its doors in 2013, where Emerson Elementary once stood before its demolition in 1981. Between 1981 and 2013, the land where the dog park now stands was a big open space where residents and non-residents could walk around and spend their time. There is now free admission (it used to be 25 dollars for membership) and no dog breed restrictions. All dogs are welcomed as long as owners take responsibility of their pets and follow their rules and regulations. [1]

Emerson Dog Park is formerly known as Emerson Memorial Greenspace Park. In the early 1990’s, Muncie Community Schools deeded the property to the City of Muncie for recreational purposes. The park was designed by Malcolm Cairns, a Ball State University Professor of the Department of Landscape and Architecture. The design of the park was meant to allow for informal recreation. In 2013, the park was transformed into a dog park, becoming Muncie’s first public dog park. From 2013-2016, the Muncie Animal Shelter was primarily responsible for upkeep of the Park.[2]

When one enters the dog park through its main entrance, you are greeted by a set of two gates that open up to the main area of the park where all dogs can play. Once inside, to right of the front of the gate there is a small, green, squared pedestal where dogs can hop on. Behind the pedestal, there are two medium sized, white dog cutouts that are facing North Pauline Ave. They are held upright by small green poles. Throughout the park, there is a variety of obstacles where dogs can play. There are hoops, ramps, and an elevated tunnel where dogs can run through. There is also a trashcan and a doggie poo bag dispenser located in the same area.

As you continue walking south throughout the park towards West Ashland Ave from the main entrance, you will bump into a large cement block with a small cement staircase and brick ledge behind it. When looking North towards North Beechwood Ave and the main entrance, the word Emerson can be seen inscribed on the large cement block. These are the last remaining traces of what once was Emerson Elementary School. Decades ago, students ran in and out of Emerson School on the same steps where dogs play today. Located nearby the staircase, there is a small plaque in honor of the elementary school.  Behind the main dog area, there is another fenced off zone designated only for smaller dogs. This area is simply an open field with a light post, a bench, a doggie poo bag dispenser and trashcan. This area of the park is mainly vacant, there is rarely any people or dogs in this part of the park. The park overall consists of mud although few patches of grass can be spotted. The park is well lit by an abundance of light posts within the park, and nicely shaded by plenty of trees. The park is well maintained and owners clean up after their pets.

Residents of the RNC have displayed different views and opinions regarding the dog park. During Ronald Smith’s interview, he mentioned that he used the park quite regularly, and thinks that the addition of the park was a great idea. He stated, “before the dog park, it was mostly empty all the time; it was a nice green space before, but it didn’t have room for a tennis or basketball court, it was mostly never used. There was no equipment for children to play on and none around to use it anyways. Now it is a neighborhood meeting spot and needed addition.”[3] Dave Wilson also shares a positive outlook on the dog park, he stated “I’m glad they were doing something positive with the area.” He also mentioned that it was a very old school that probably needed to be torn down. Although Dave has a dog, he does not take his pet to the dog park because his dog “doesn’t get along with others.” [4]

On the other hand, some residents see the dog park as a negative feature of the neighborhood. Former Superintendent of Parks in Muncie and current Immersive Learning Manager at Ball State, Matt Bailey was firmly against the idea of a dog park in the neighborhood when it first came up. He didn’t want the dog park to replace any of the large parks that he liked. He knew it wouldn’t be popular with many of the residents and assumed many would “throw a fit.”[5] He also stated that he thought that the Emerson site was the best place to put it because of its relative small size and central location in the neighborhood. He mentioned that there were some people concerned with Emerson because they wanted a passive park. Matt had to deal with issues and complaints about the nature of having a dog park in that spot due to his position as Superintendent. Many of the issues came from residents that wanted the area to remain a passive park instead of it becoming a dog park. In his publication “The Emersonian”, Dr. Phil Ball expressed his thoughts on the addition of the dog park. He states: “I read in the newspaper today—and therefore it must be true— that the hallowed ground of Emerson Park to Ashland and Linden Avenues—will become a dog poo depository and canine exercise plot. I am a dog lover but find it hard to accept that this sainted ground will become a place for dogs to eliminate waste products.”[6] Dr. Ball was a member of the original Ball family that arrived in the area during the 1830’s. He had a very successful medical career as well as a published writer for more than fifty years. Phil Ball was also the “self-proclaimed mayor of the RNC”. During the election for mayor of Normal City, of Phil Ball embedded a second “persona”, and called himself Charles F. Coldwater in order to spare any political views. At the age of 96, Phil Ball passed away on February 4, 2016.

There are also some residents of the RNC neighborhood that have no knowledge of the existence of the park or don’t really care too much about it. During an interview with Morgan Fuller, she admitted that she had no knowledge of the dog park. She also thinks that “these kinds of nearby places should be advertised to the students more.”[7] Sue Gaylor said in her interview that “we’ve got a dog place down there now, which is alright.”[8] Having a dog park within the neighborhood might be a selling point for someone that is looking into moving in to the RNC neighborhood, especially for those who own a dog. Some may think that the value of a neighborhood will increase with an addition of a dog park while some may think it will degrade the neighborhood. It is probably common to find negative views and opinions about the new dog park from residents that have ties to Emerson Elementary. Many of them would have emotional ties towards this area, and think that the park is not a good way to remember and honor their elementary school. For new residents, they either have positive views or nothing to say about the dog park. New residents and families (especially those with dogs and younger children) on the other hand, have expressed positive thoughts on the park.  Heather Williams stated that they have dogs and they walk their kids to the park. Scottie Limbird also agrees by saying, “the dog park is a great place for a walk with the kids, let’s them run around in it and play.”[9]

Space is one-dimensional and is only a physical location. Place on the other hand is a bounded form of space that has concrete physical features, is shaped by humans, and reflects an emotional attachment. Places are bounded in the sense that they can usually be located in space, in a map or by using coordinates. Places also tend to have specific characteristics, like natural features or architecture. Space will transform into a place once it has been inhabited. When it comes to Emerson Dog Park, there is a strong sense of place. This small area has been used in different ways through the years. From 1922 to 1981, this area was used as a school. It was an area where children would come together to learn, explore, and socialize. You could hear the children laughing and playing around in the courtyard during recess and once the school day was over. After the school was demolished in 1981, the space where Emerson School once stood became a park where residents and non-residents alike could go to walk around and relax, yet according to RNC resident, Ronald Smith this area was empty almost all the time. In his publication, “The Emersonian”, Phil Ball states “many times a year I go to Emerson Park and sit for a few minutes and reminisce about the characters and the monkey business and the fights and the bullying and the hormone surges that were once there.”[10] Then in 2013, the once empty park became what is now Emerson Dog Park. Its new role in the neighborhood is as a place to socialize and come together as a community. It is not just an area for dogs to play and run around; families, specially children, run around and have as much fun as the dogs using the facility.

According to the article, “Managing contested greenspace: neighborhood commons and the rise of dog parks” by Daniel Matisoff and Douglas Noonan, dog parks in neighborhoods have increased drastically since the 1990s as well as dog related demands. Dog parks have increasingly moved from being a controversial topic to part of the mainstream planning process for urban planners and park and recreation departments because of activists and dog enthusiasts. Spending in the “dog economy” (buying, feeding, caring for pets) doubled from 1994 to 2004. The demand for dog parks has increased because of the large boom within the pet economy. The article “Fasters-growing urban parks are for dogs”[11] by the USA TODAY, states that there are now over 570 dog parks throughout the United States. These explain different conflicts and positive outlooks that a dog park can bring to a neighborhood just like the RNC, such as degradation, overuse, personal conflicts, etc.

Some ways that a dog park might cause problems in a neighborhood are the potential physical degradation because of congestion, overuse, and maintaining safe conditions for the users. Congestion and overuse can degrade the infrastructure of the park itself and decrease the vale and appeal of the neighborhood. According to Matisoff and Noonan, “dog parks generally rely on the self-enforcement of rules by users.”[12] Conflicts between dogs and owners may also cause some problems within the community that could possibly affect the neighborhood. This relates to Emerson because residents have expressed similar concerns. Nancy Elliott said, “I haven’t been to the dog park yet but I have a dog. Amber takes her dogs there but stopped taking them because people were taking advantage of it and not supervising their dogs enough.” Bill Morgan also expressed similar thoughts by stating, “we have had some less than happy experiences there and it seemed like there were a lot of dog owners who were not paying attention to their dogs and so we had some issues with some pretty aggressive dogs and so forth.”

By having a dog park in the middle of the neighborhood, a sense of community might emerge and grow. Even if one doesn’t own a dog, the dog park is still a good resource to use. A dog park doesn’t have to degrade the value of a neighborhood if residents and non-residents alike cooperate to maintain the dog park safe and in good conditions.

[12] Matisoff and Noonan. “Managing contested greenspace: neighborhood commons and the rise of dog parks.” International Journal of the Commons,